For Somebody Out There

This is a letter for you.

I am very inspired by the words and life of Chris McCandless. He had more passion for life, love, and nature than most people I know or have heard of. His entire life was focused not on success, but wringing every drop of adventure out of this world. He had everything in his hands, he could have done whatever he wanted to do, but he chose, at a young age, just slightly older than myself, that he wanted to forego society, break free, and look for ultimate freedom. He didn’t let anybody tell him otherwise.

Just now I’m starting to realize the importance of the words he said, and these I say to you;

“So many people live within unhappy circumstances and yet will not take the initiative to change their situation because they are conditioned to a life of security, conformity, and conservatism, all of which may appear to give one peace of mind, but in reality nothing is more dangerous to the adventurous spirit within a man than a secure future. The very basic core of a man’s living spirit is his passion for adventure. The joy of life comes from our encounters with new experiences, and hence there is no greater joy than to have an endlessly changing horizon, for each day to have a new and different sun… You must lose your inclination for monotonous security and adopt a helter-skelter style of life that will at first appear to you to be crazy. But once you become accustomed to such a life, you will see its full meaning and its incredible beauty. DON’T HESITATE OR ALLOW YOURSELF TO MAKE EXCUSES. JUST GET OUT AND DO IT. JUST GET OUT AND DO IT! YOU WILL BE VERY GLAD THAT YOU DID.” 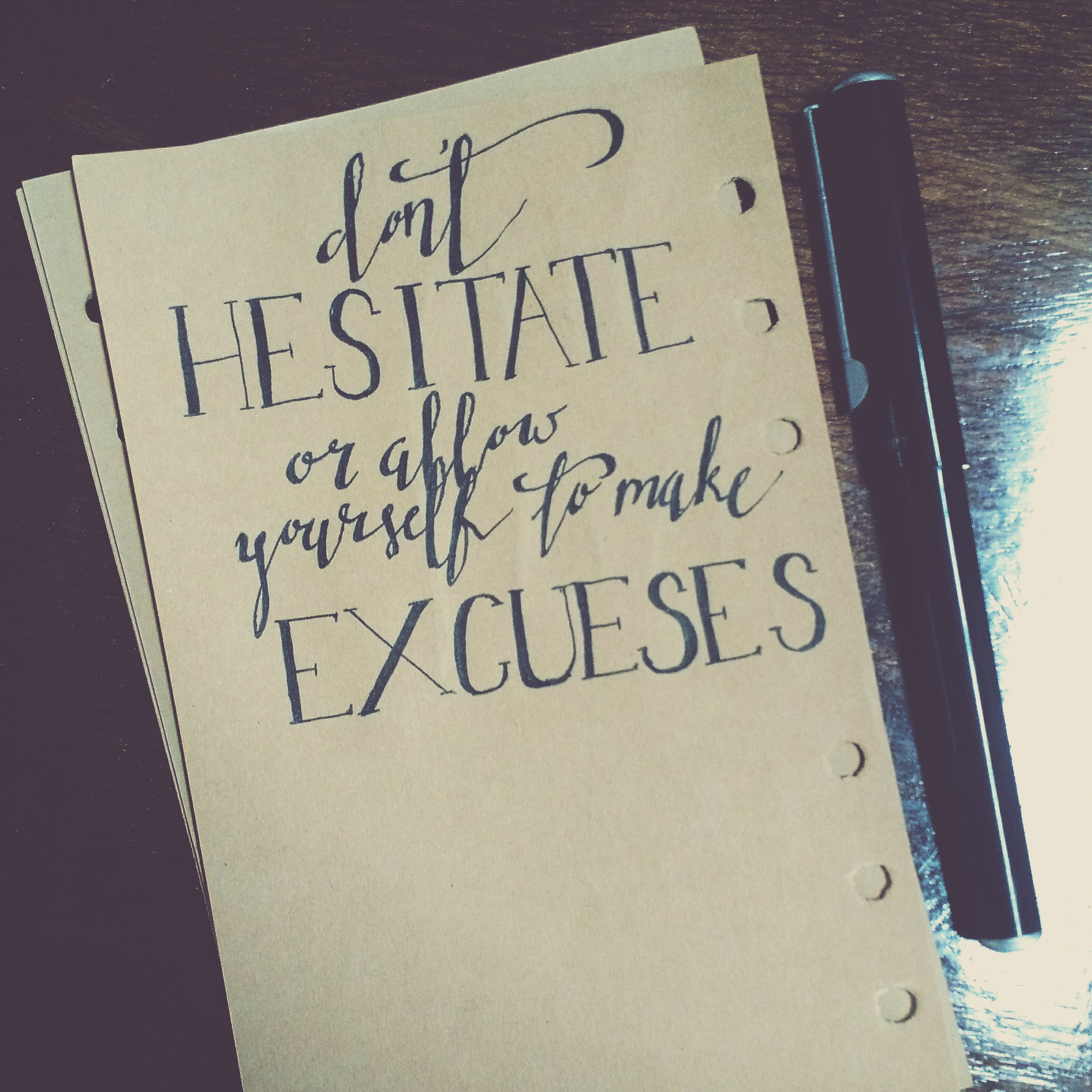 I have been learning calligraphy and lettering again since coming here, and really love it! I’m not super great yet, and I was very jittery from my coffee this morning! Go learn something new!

The moment I read this a few years ago, I knew that it would be something to live by, and unfortunately, I’ve been really good at ignoring my own advice. We often sit in our situations, think to ourselves how great the past was, or what could be, and we spend so much time thinking “well, why can’t I be like that?” or “if only this person could be here, things would be better.” You’re just lying to yourself and wishing for something that can’t happen. They could be there, or you could be different, or in a different place, or whatever it is you think would make your situation better, and you’ll be temporarily happy or content while that’s there, but then you part ways, go home, and you will be right back where you started. Wishing is good, but not when it becomes more important than reality.

I can’t say this lightly, DON’T JUST SIT THERE AND DO NOTHING! I wouldn’t have gotten to the Big Island of Hawaii, raised $7,000 in support, and took 6 months out of my life to do something radical and crazy if I was just going to stay in my room watching movies and eating Ramen noodles. And I would be miserable if I was still home. I would has just finished my first year of college, spent a lot of money I didn’t have, and would probably still have no idea what I would be doing. And all it took was one step and saying “yes” to God, and taking the chance.

I get it, it’s comfortable to stay in the situation you’re in; it’s good to know how you function and work within that, and it’s good to have financial security and a detailed plan. But what will you get out of that? Get outside, go walk somewhere you haven’t before, do something against your character, take a chance, don’t worry about money all the time, there’s plenty of money in the world, and it’s honestly the least of your worries right now, go out on an adventure without a detailed plan. Just do it. Go & Do. 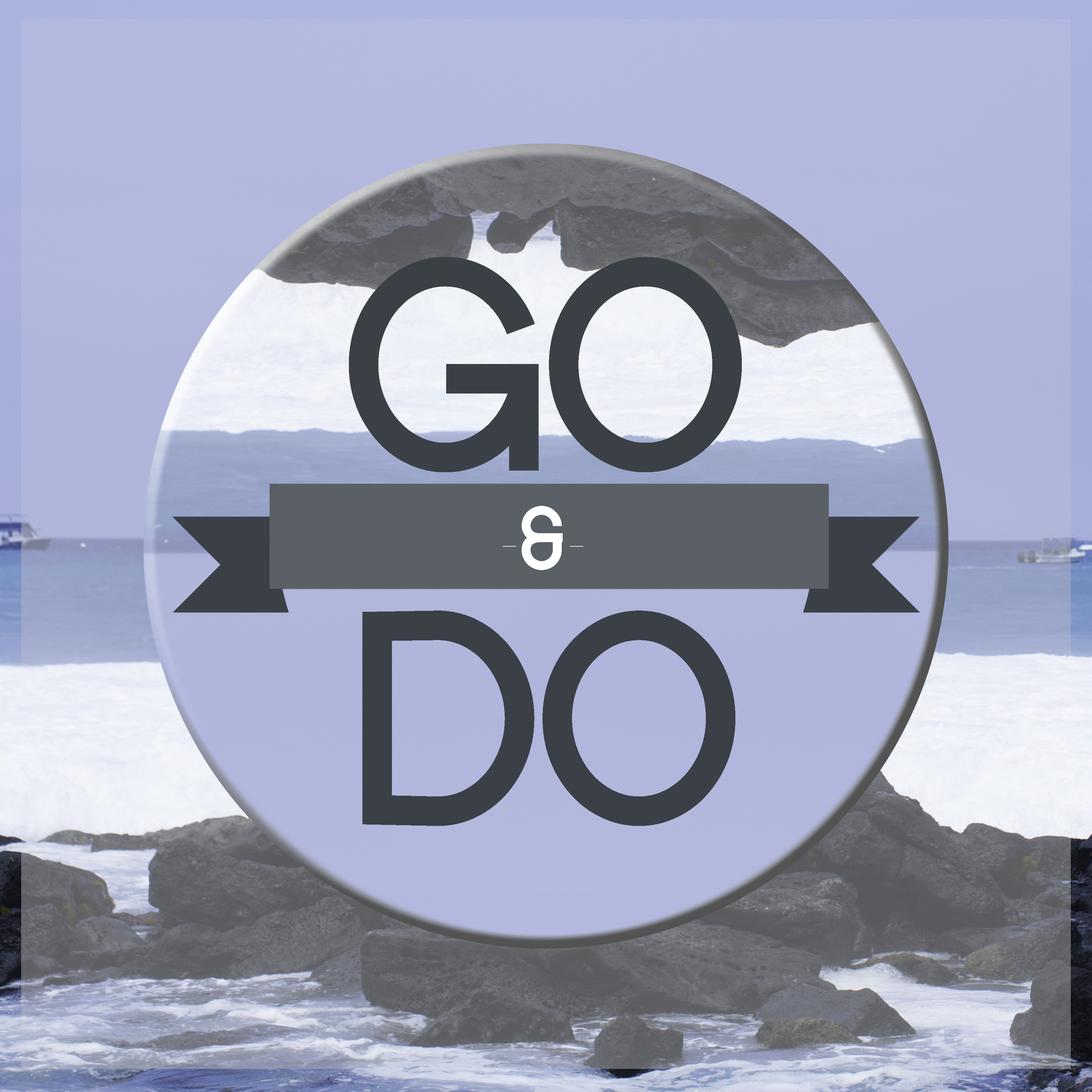 For some reason, this week just started putting some of the pieces together, and what I’m telling you are things I am trying to live out in my own life. It’s crazy how you can say you believe in something, but to actually put it to practice, it takes so much more effort, and it’s difficult, but I’d rather be struggling out there than sitting in my room wishing I could be out there.

For you creative people who have hit a wall, you need to stop making excuses for yourself, stop saying you’re uninspired by the place you’re at, your’e too busy, etc. Go do something spontaneous, take a drive somewhere, if you can’t drive, grab your bike, a disposable camera or two, and go find what you think is beautiful in the world.

Go out, and find what you think is wonderfully made, it could be a person, it could be a place, a thing, something that makes you happy, but go somewhere you’ve never gone before. GET OUT OF YOUR COMFORT ZONE! If it’s something you really don’t like doing, even better, definitely do it.

Take those pictures, get them printed, and hang them on your wall. Every day you look at it, you’ll be seeing what you think is beautiful. That’s your inspiration. I dare you to try this.

I’m in the process of overcoming fear. If I allow myself to accept living in fear, will I ever overcome it? If I accept this thing as a part of my character, will I ever grow? If I say where I’m at is good enough, will I ever be enough?

I’d be lying to myself if I think so. Now there is a difference with being content with where you’re at and knowing that’s where your supposed to be for the moment. But it’s a fine line. It’s good to know where you are, as long as you know that’s not where you’re staying. But if you accept it as your fate, and say there’s nothing out there to change it, that’s when you run into problems. It’s so damaging to just be content in your crappy situations, so don’t do it. I’m being completely honest here.

When I sat down to write this blog, I originally started with something else; telling about my week, our speakers, and that the rest of my funding came in, but halfway through, I had this urge to change subjects. God is the incredible provider, and I’m so grateful that funding came in, but I have a feeling that some of you reading this are stuck in a point in life where you feel like you can’t go anywhere, and I think this is a more important thing to write than me celebrating in my success.

There is nothing stopping you but yourself. 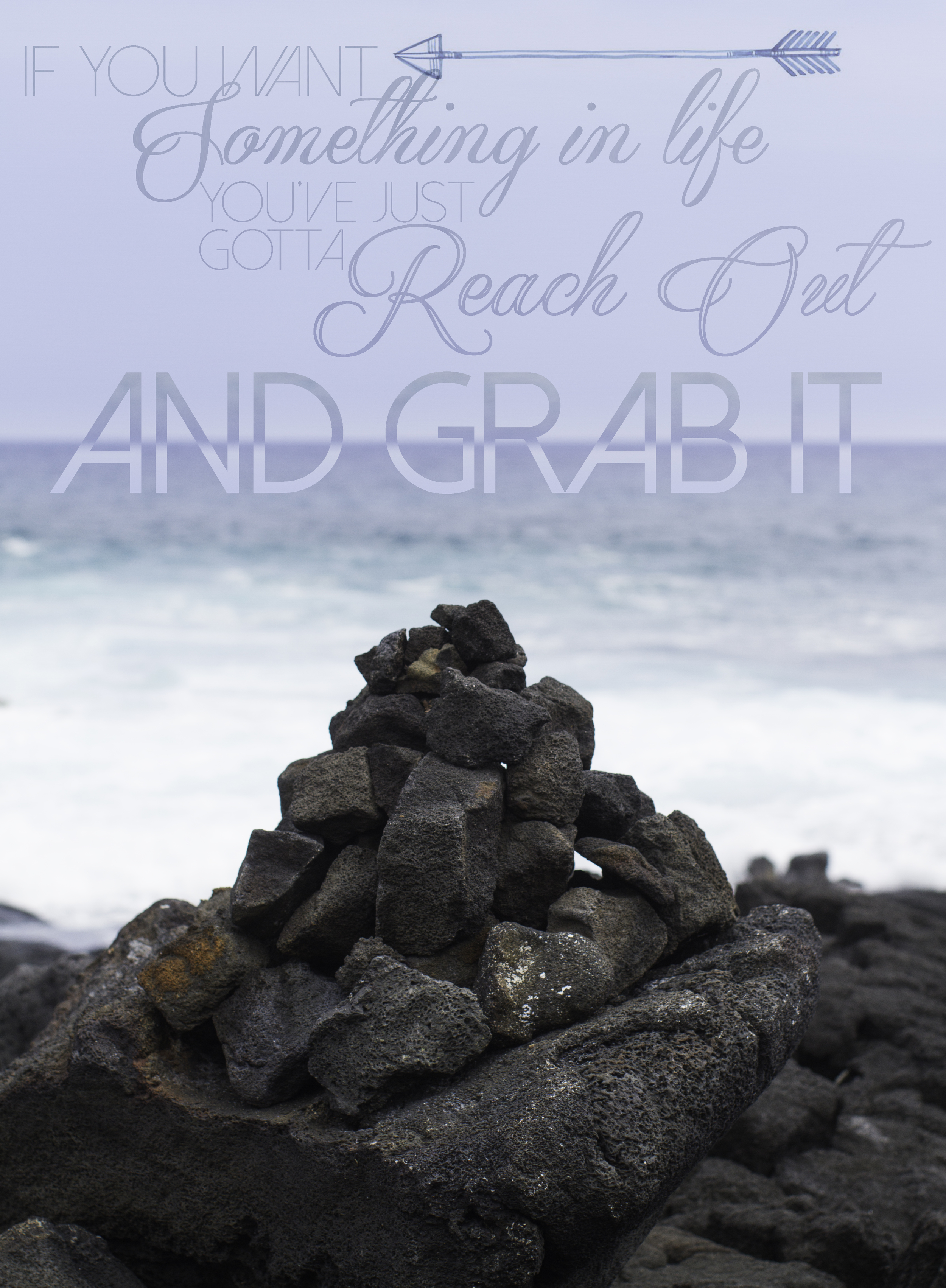 This is a cairn that I built on the shores in Hawaii. We were asking God to direct us in prayer and photography, and He told me to build a cairn, which is just a pile of rocks that guides hikers on the trail. It gives them direction. God wants us to pray for direction instead of just trying to figure it out ourselves, but He can’t do much if we refuse to get up.

Just get out and do something.

Go take pictures, go paint something stupid, go on a random, pointless adventure, but summer is here, and if you spend it doing nothing, you’ll regret it years down the road.

Go forth and conquer.

Just a couple of quick notes; My camera came back Monday fixed and good to go, the parts came in for my lens and that will be repaired pretty soon. I am now fully funded! And I leave for Mexico in less than 20 days!